During the 1880s, the Little Rock Springs School was the temporary site of learning for Escondido children. The “Three R’s” were taught to one class of children in the 1st through 9th grades, with as many as 50 students. Elizabeth Judson was the only teacher, and she continued teaching at the new Lime Street School when it was built in 1886.

The new school was Escondido’s first full grammar school. It was constructed in what was then the northern part of Escondido, close to Escondido Creek. It was located in what is now Grape Day Park on Broadway. Lime Street School was a two-story, red-brick building with eight classrooms. The cost was $9,000 for construction and furnishing of the school. It was built for 200 students, but with Escondido growing, it soon was filled and overflowing. 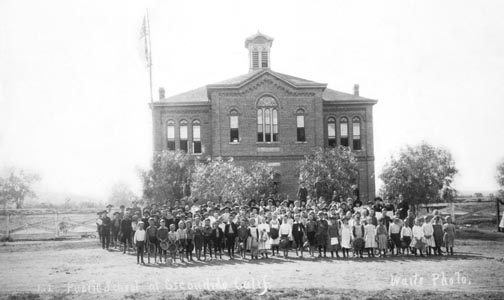 Six years later, in 1892, the Lime Street School was joined by a second grammar school in northeast Escondido. The school was nestled in a grove of oak trees and was appropriately called the Oak Glen School. The school was short-lived, however. A fire razed the building in 1894.

The ashes of Oak Glen School were still smoldering when the townspeople pitched in to change the situation. Through their united effort, the school was reconstructed within a matter of months. But the oak trees of 1892 were no longer abundant. Orange trees belonging to the orchard of B.F. Dixon replaced them, and the school became Orange Glen School.
Meanwhile, the Lime Street School was having problems just as serious as Oak Glen’s. The sandy shores of the river did not provide an adequate foundation for the school. Cracks in the school began to widen, alarming children and parents. In 1909, the building was condemned and torn down. The Lime Street School site became part of the grounds for Grape Day Park. Lime Street was later renamed Broadway.

After the demolition of Lime Street School, construction began on the Escondido Grammar School. The school was also known as the Fifth Avenue School, the name coming from its location. The new two-story, red-brick school was structurally similar to its predecessor.
The Escondido Grammar School was not completed until October 3, 1910. This meant that the students were without a classroom for close to a year. To accommodate students, classes were spread out throughout the town, wherever a vacant room could be found. Double sessions were held, with 1st-graders attending school in the morning and 2nd-graders attending afternoon sessions. The October completion of the school was a welcome relief to students, parents, and school employees. 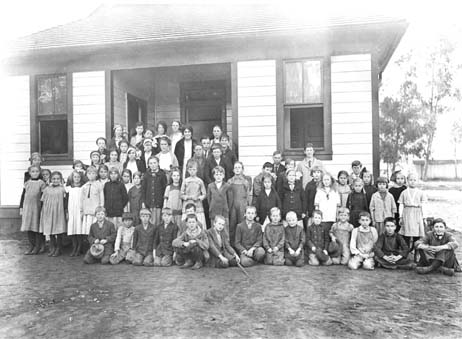 Orange Glen School and the Fifth Avenue School enjoyed a short period of unity as part of the same school district. Three years after the grammar school’s construction, however, the two schools began to battle over the distribution of taxes. The rift began to widen and soon it couldn’t be closed. In 1914, Orange Glen School withdrew from the Escondido Grammar School District and formed its own system. It would take more than half a century before the two would have reconciliation.
The 1920s did not necessarily mean rapid growth for the Escondido Grammar School, as it did for many communities across the nation. Some additions were made to the Fifth Avenue School, but none that amounted to any significant level. Five classrooms were built in 1923 and some additional rooms and a kindergarten were built in 1927. The final touch to the school was made at the beginning of the new decade with the addition of two reinforced concrete classrooms. The two rooms were destined to be used as the administrative offices for the school district.

In 1933, the nearby Oakdale District wanted the assistance of the Escondido schools in educating their children. On April 28, the Board of Trustees entered into a contract with Oakdale. The contract stipulated that:

1. Children of Oakdale will receive full-time instruction in the Escondido Elementary Schools.
2. Escondido’s Board of Trustees will provide transportation for the students of the Oakdale District.
3. Oakdale will pay Escondido the funds normally received for the education of the children.

The contract with Oakdale was effective for the 1933-34 school year. The temporary merger was so successful, however, that Oakdale joined the Escondido Schools District in 1935. The merger was the birth of the Escondido Union School District.

The Great Depression in the 1930s had its effect on the schools, as it did on everyone else. In 1933, contracts were awarded to the teachers for the 1933-34 school year. Each of the teachers received a 5 percent decrease in salaries from the previous year. The superintendent, J.W. Lawson, accepted a voluntary decrease in wages from $4,000 to $3,500 per year.

The Board of Trustees decided to expand the site at Fifth Avenue in 1936. The Board of Public Works Administration, a New Deal Agency, sent a letter of application. The application was for a grant of $15,000 to make additions to the school. The additions were necessary because the 1909 brick building was to be demolished soon. It did not meet earthquake safety standards and it was more practical for the school district to replace the building, rather than rejuvenate it.

The Board of Trustees went to the community in 1937 to ask the voters to approve a bond issue. The bond issue of $130,000 was passed and advertisements for bids opened. Construction of the new elementary building began and ended in 1938. Demolition of the 1909 Fifth Avenue School took place that same year.

In July 1941, the Board of Trustees purchased a ten-acre site on North Broadway Avenue for $8,000. The land belonged to J.B. Patterson and included his place of residence. This building became the nursery school of the newest school in the Escondido Union School District. On August 3, 1942, the Board of Trustees decided upon names for both schools. The one constructed in 1938 across from the Fifth Avenue School would be called Central School. The North Broadway site would be called Lincoln School.

During World War II, the school district’s major problem was finding enough teachers to keep in the classroom. The draft was summoning many of the male teachers to war. C. Delmar Gray, the Superintendent, made several trips to Los Angeles to recruit replacements. One month before the Pearl Harbor attack, the Board of Trustees drafted a resolution requesting a deferred classification for a teacher. One year later, the Board of Trustees was granting that teacher a military leave of absence.

No sooner had World War II ended, than the district expanded once again. On October 15, the Board of Trustees accepted the Richland and Rincon School districts into the Escondido Union School District. Later in 1950, the Twin Oaks building was sold for $1,500 and the Rincon building for $200.

The growing number of students necessitated the expansion of Lincoln School. Toward the end of 1947, 12 Quonset huts were purchased from the State Educational Agency for surplus property. These huts were refurbished with concrete floors, electrical, heating, and plumbing systems and a public address system. The huts were used as classrooms for a number of years. Today, they are used for the maintenance and transportation departments.

Soon after the Quonset huts were established, Lincoln got some more additions. The district was able to add four classrooms with money obtained from the passage of a $300,000 bond issue in October 1949. More important than the addition of classrooms for Lincoln, the Board of Trustees was able to purchase land for a new school. On February 13, 1950, the Board approved the name of the new school. It would be Felicita School.

A notice of completion for Felicita School was posted on October 8, 1951. The new school had 10 classrooms, one kindergarten, and administrative offices. A sprinkling system for the grounds had been suggested, but it took a little while before one was finally installed. The watering system was installed in 1975.

Even with the addition of Felicita School, classes were crowded. At Central School, administrative offices were squeezed between classrooms. The old building on the corner of Fifth and Maple Streets held all the primary classes. Originally called the Central Primary School, it was changed to Maple School in late 1951. The sale of more bonds in 1953 changed the situation.
With $480,000 earned, the school district could look into the possibility of constructing a junior high school. The 17-acre site on Grant Street was chosen for the new school. The nineteen-room Grant School was completed in October 1954. It was the last of the new schools opened in the 1950s.

The school district did acquire some land in the decade. An Escondido citizen, Mr. Lawrence R. Green, donated the land. Mr. Green and his wife Georgia donated three parcels, totaling 77 acres. For his generosity, the Showcase of the Arts honored him with a portrait. The portrait was presented to the elementary schools and now stands in the administrative offices.

It seemed that there was a new school opening each time one turned around in the 1960s. But the additions were necessary to accommodate the greater enrollment. In this decade, these schools were constructed:

The 1970s started off with a happy occasion for the Escondido Union School District. It reunited with the Orange Glen District, some 56 years after their separation.

The Orange Glen District had about 1,100 students in two schools; Orange Glen Junior High and Glen View School. Its area was about 17 square miles and it would soon have too few schools and an increasing tax rate. The Orange Glen trustees petitioned the Escondido schools in 1969 for annexation. The question was taken to the voters on December 9 and was approved. On July 1, 1970, Orange Glen and Escondido became one district again.

Even with annexation, schools were beginning to feel overcrowded once again. The need for double sessions arose, as it had throughout the district’s past. In 1972, an attempt was made to alleviate the overcrowding problem.

A citizens advisory committee was formed in 1971 to study the feasibility of implementing a year-round school system. After studies proved favorable, three schools, Miller, Conway, and Rose began pilot programs in July 1972. The next year, Grant, Glen View, and Central joined the year-round system. The year-round school system stayed in effect through the mid-1980’s.
During the 1970s, only two more schools were constructed. Unlike the 1960s, construction was much less prolific. These schools were constructed:

Three more schools were necessary during the 1980s to accommodate the district’s ever-expanding enrollment. In this decade, these schools were constructed:

The last decade of the century saw the district’s two newest schools constructed. At the same time, the district’s administrative offices were moved to a site on Grand Avenue formerly occupied by the Escondido Village Mall. The construction of these last two brought the district’s total to 19 schools. They were:

On July 1, 2006, Grant Middle School was re-named Mission Middle School, to re-align the school’s name with the city’s previous change of the street name.

In June 2015, the Community Day School at the Nicolaysen Center was closed.  During the summer of 2015 the campus was converted to the Quantum Academy at the Nicolaysen Center, re-opening for the 2015-16 school year as a STEAM (Science, Technology, Engineering, Arts, Math) focused school of choice. The school servers grades 4 through 8.